With the chance of showers and thunderstorms at 90%, Ben and I were prepared to endure a day of suffering beyond the usual bike race. We geared up as rain became spotty – we all took it as a sign of the storm that was ahead. Needless to say, we were both nervous for our first rain race. I ran my tires at a lower pressure and was ready to take any necessary precautions.

Chris Durand’s words of wisdom: “You never win a road race in a corner.”

I mulled over the endless possibilities of what was going to happen and when the time came to line-up, I was mentally prepared to ride fast and take chances (when the odds were in my favor).

I was relieved that the beginning of the race was dry and that my competitors didn’t hammer it from the gun. Everyone allowed a nice warm-up before picking it up to blistering speeds of 35mph on the flats. Team Abundance seemed to dominate from the beginning (those guys are fast!), throwing off attacks and reeling in any and all loose ends. Eventually they had one train of a racer off the front and alone.

The course had one small hill/roller, and on lap three I lead the pack over the top. When I pulled off on guy said “we broke, keep it going.” I sat up in disbelief and made them pull around. Sure enough, I found myself in the middle of a four man break and the pack. Shit! there goes the winning break. 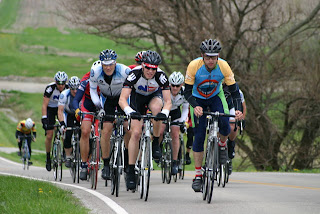 My only hope was that they wouldn’t last. The pack tried to chase, but Abundance cleverly put themselves in the way, disrupting any efforts and leaving men out to die alone in the wind. Eventually they were out of sight and people lost hope of bridging the gap.

On lap 5 people stated to attack again, and sure enough a few guys started a second break. I wasn’t there immediately, but saw it as my only chance to get a decent finish. I jumped hard and went solo to the guys ahead.

Once on, I clung hard – white knuckled and giving it every once of energy I could find. Unlike any other break I had been in, these guys did not work together. Everyone kept attacking everyone. It was truly an everyman for himself situation. My only thought was to hold on until the finish. I took turns harder than I ever had to keep a draft and truly pushed myself to my limits.

Finally, I saw the finish line ahead and new that I had sealed at least a top ten finish (payouts and space ho’s!). Didn’t have anything for the sprint and watched the other guys blast past me. I was pleased with my result because I knew I had given it my all to get where I was.