The last race of the spring series was unlike all other races. It was a crit – A 1km lap with a serious climb (the finish line was at the crest), a downhill 180 and a fast flat section. We were all excited when we saw how big the hill was and were impressed that Team Abundance found such an awesome, isolated course.

Scott chose not to race because of his 11:00am start time, and since we had all been out riding and bleeping until 3am the night before, we figured 2:15 for the Cat 4’s was as early as we could handle.

Ben and Starr lined up against 30 or so other racers. They had played a little “race before the race” tactic and got pretty good starting positions, which gave them the advantage of good positioning early on. From the sidelines, it looked as though the pack hit the hill hard the first few laps. People were quickly being dropped off the back and we were excited to see Hungry Kits at the front and in control. Ben and Starr both looked strong everytime around. Around lap 15 of 25, Starr was suddenly gone from the pack. On the sidelines, we were all worried he may have wrecked on the decent. Fortunately, it was just a flat tire and he was okay. As the rest of the race continued, Ben remained in good position, staying near the front and helping set the tempo. The final lap bell rang and the Team Hungry supporters (Jackie, Family, Scott and I) anxious for Ben to do well. He Did! We watched Ben fly up the hill and take 3rd position! Nice Job Ben!

Some photos (taken by Scooter) from their race: 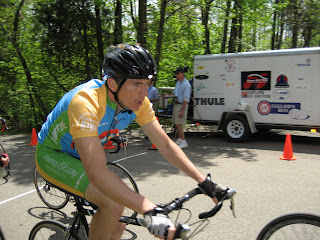 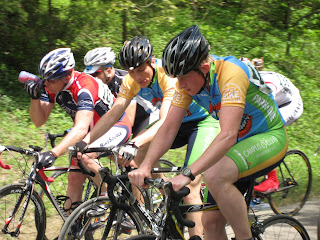 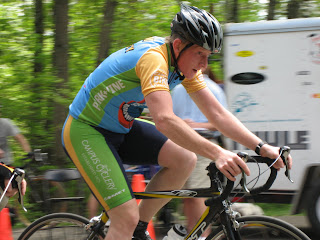 I was pumped with adrenaline after watching Ben do so well. Our race started in a similiar manner – the first few climbs were hard and fast and the natural selection was made pretty early on. Fortunately, I made the cut and was riding with about ten other guys. About half way through the race, some guy proved that he was naturally the best by taking off the front and almost lapping us. I didn’t jump with him because I figured the 5 Abundance guys in my pack would start a chase. I think they were more focused on the GC and just let him go.

My strategy was similiar the Ben and Starr’s. I tried staying as near to the front as possible and picked up the pace on the hill whenever people were trying to take a recovery lap. That tactic got me through and with three laps to go, Jamie Raddin, the guy who wins almost every race, jumped hard. I reacted with all I had and managed to get on his wheel. I held it for one lap until he took the 180 turn a an amazing speed. I was unable to hold his line and let a gap open. Needless to say, there went second place for me. I was able however to stay away from the pack behind and rolled across the line 3rd, only seconds behind Jamie. 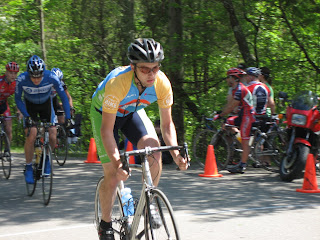 With two podium finishes, it was the Team’s best day yet. Ben got a real podium picture, but I managed to miss my photo-op. Here’s how we made up for it. We were all winners after all! 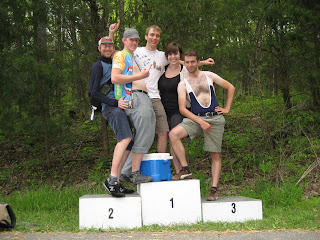 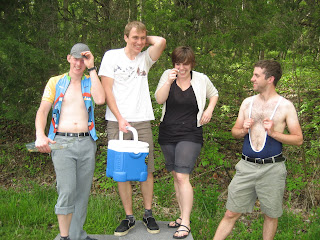