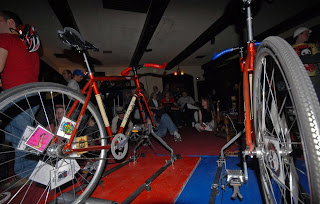 One of the reasons the members of Team Hungry are so damn good at riding bikes is because we know how to have fun and let others in on it! This past Friday, January 23rd, the unofficial Team Hungry event better known as Cincinnati Goldsprints, aka CincySprints!, was held at Grammers on Liberty at Walnut. Why was it unofficial? Well because the people who, about a year ago, started spending their own time, money and brain power putting the system together just so happened to join Team Hungry later in the year and bring their baggage along with them. Just our luck! 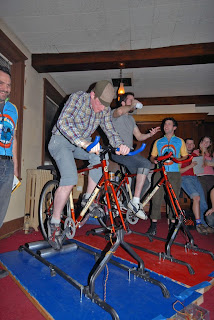 The night consisted of a diverse gathering of roadies, single trackers, cycloX-r’s to commuters, fixed gear hipsters, general bicycle enthusiasts, pedestrians and according to some of the READERS of the Two Johns Podcast, “poseurs.” It was a smooth operation with highlights including beer races (see left, Ben can chug!), female only races (see below) and an underwear race, for a wheel set (also see below, if you dare).

The CincySprints! crew can’t wait to put the event on next month. In the meantime you can find additional photos and the results posted on Facebook and Myspace. Stay tuned, we will let you know the exact date of the next installment of CincySprints! 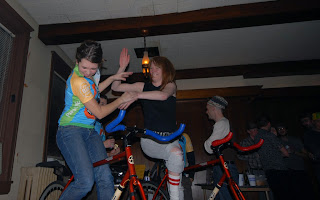 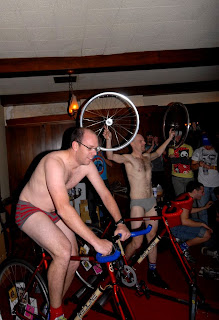 p.s. To reinforce the previous post, you better get used to seeing this at the front of the pack…