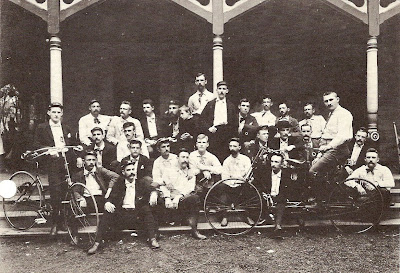 So as promised, I poked around a little bit more at some of the State and Federally funded repositories here in Cincinnati and found some more interesting bits on the Brighton Bicycle Club. This was a group of guys in 1885 who rode bikes and drank beer and wore a lot of wool. Today, they would look right at home at the local “tweed ride.” I find this club interesting for several reasons. One being that I lived for a number of years in Brighton and was curious about this group from more than a hundred years ago. Another being that this group was a fringe group to the “Cincinnati Cycle Club” and they seemed to have some similarities to good ‘ole Team Hungry; They raced (or scorched as they called it), they went on long rides, they were not opposed to having a good time and well, when they wanted to go on a ride they all met up here: 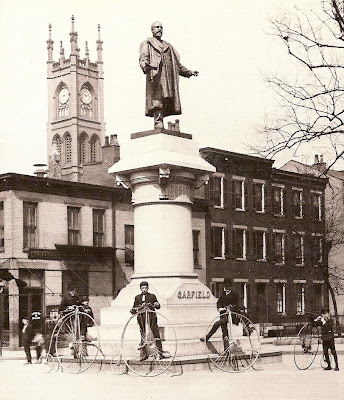 For anyone who has been on a Midnight Madness ride you will immediately recognize Garfield Place. It was reported that on any given night that cyclists could be found riding fast up and down “Race Street.” I wonder where that name came from? Oh, there was also a Cincinnati Club in 1897 called “The Comet Wheelmen,” but I cannot find any more information on them.
Anyway, in my last post I shared the snippet from Outing magazine and have since taken some terrible I-phone photos of one of the club rides out of Cincinnati. 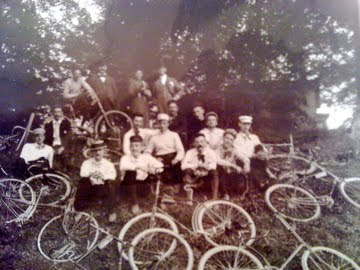 So here’s the crew taking a breather. They’re wearing the new team kit for 1885. Anyway, they got to drinking a little Moerlein and there’s the facebook evidence to prove it: 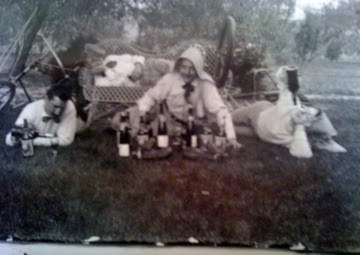 These chaps had some fun – I only was able to sneak a couple of photos under the watchful eye of the old lady who is the Matron of the Cincinnati Historical Society Library, but there were a ton of their bike party pictures.
These fellows had fun and drank beer, but they also raced. 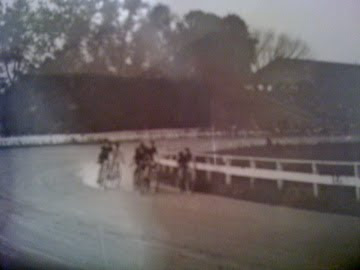 Here’s a view of a race from the 1880’s in Ludlow Ky. I apologize again for the crappy picture, but the Matron got suspicious and started to turn around. Damn Iphone “shutter sound” function. That’s Fritz in the front. Here’s the start of a scorcher in 1886 outside of downtown Cincinnati: 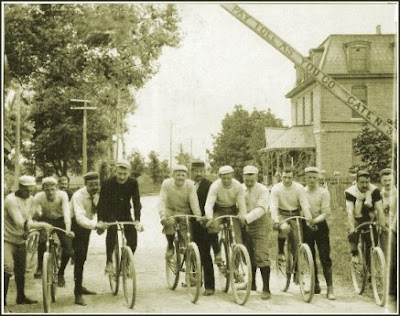 The Brighton Bicycle Club was listed from 1884 to 1888, after which I lose their trail. So for about four years this club raced and had fun on their bikes. Their clubhouse was on Freeman Ave just down from the Canal in Brighton. Their members were all living in the area bounded by Blood Run Alley, the slaughterhouses, several breweries (Bellevue was one), and Spring Grove , which at that time was lined with Elm trees and was a favorite race track. In my little bit of research I’ve just encountered a trip report that a cyclist wrote about his trek from Cincinnati to Lexington in 1887 which I haven’t digested yet. It’s kind of interesting to think that the roads we ride on have had riders and racers scorching along them for more than 150 years. Something to ponder on your next excursion.